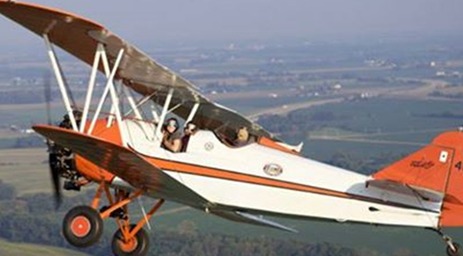 Have you ever sat down with one of your elders and just talked about how things were when they were your age? I'm sure you have done that a few times in your days of growing up. Everyone has a different story.

This aircraft is nearly the same as a human. It has a story from the past that has most people finding it hard to believe. Built in Wichita, Kansas in 1929 to three friends; Cessna, Beech,and Stearman. The Travel Air was and is the barnstormer's aircraft of choice. This beautiful antique aircraft is fabric covered and carries two passengers at a time. The rugged construction and pilot friendly flight characteristics are just a few of the features that make the Travel Air the ideal barnstorming machine. The nickname " Wichita Fokker" has followed it for almost 90 years because the shape of the rudder and wingtips resemble the german Fokker aircraft.

When you take a ride in this beautiful aircraft , you will be a part of it's history. This particular Travel Air is the true meaning of a work horse. Originally it was powered with a 225 hp Wright Whirlwind R-760, and then converted over to the popular 220hp Continental R-670. It was owned and operated in the early 1930s by the famous Pepsi Sky Writer Andy Stinis and then later was sold and used for many years as a crop duster. Now the aircraft is configured back into what is knows best, barnstorming over the country for the pleasure of reliving it's glory.

The aircraft paint scheme brings a very important significance to our aviation rich heritage. The famous Flying Aces, was a flying circus that was owned and operated by Jimmie and Jessie Woods. The Flying Aces operated from 1929 - 1938. The Flying Aces were the largest and longest lasting flying circus in those days. Jimmie and Jessie and the crew would travel all over the United States entertaining thousands of people during one of the worst financial depressions ever seen. During these hard times the flying circus flew to towns and cities all across the country offering daredevil airshows for only $ 1.00 a car load. At times up to ten thousand spectators would be in attendance at one show as they preformed death defying aerobatics and wing walking. Jimmie was one of the Aces pilots and the head mechanic, as Jessie was the attractive wing walkin, skydiver daredevil that attracted thousands of people to the show.

The New Standard was designed by Charles Day and Ivan Gates. Charles Day was one of the most well known aircraft designers during this era. His claim to fame was the design of the J-1 Standard from 1917. The J-1 was a WWI training aircraft that competed against the famous Curtiss built JN-4 Jenny. The J-1 was Arguably the better flying aircraft over the Jenny but with aircraft manufacturers and government politics the J-1 was grounded due to engine issues making the JN-4 Jenny the success in the first World War. After the War the pilots started buying surplus Jenny's from the government for just a few hundred dollars. They started Barnstorming and making names for themselves as pilot's, Barnstormers, and even God's of the sky. The Jenny was powered by a OX-5 engine, 90 hp 8 cylinder water cooled V-8. The OX-5 was a 1915 design and at the time was the most advanced engine on the market.  Jenny's flew hundreds of thousands of people during it's barnstorming days.

The government decided to sale J-1 Standard but without their Hall Scott engine. Barnstormers started buying these J-1's simply because they were bigger and much better aircraft than the Jenny.  Purchasing and installing a Italian engine (Hisso Suiza) they could install a 150hp engine and fly 2 passengers at a time or install the 180hp or 220hp engine and fly 4 passengers at a time. The J-1 was the barnstormers dream machine. They could fly more people and still perform all the stunts and tricks in a normal day.  In 1926 the CAA mandated that all aircraft had to be certified for commercial operations. The Jenny and the J-1 Standard did not fall in this category so that hurt the barnstormers business plan. Most of the went out of business or continued illegally.

The birth of the New Standard. Ivan Gates owner of the most popular and largest flying circus in the world wanted and needed a 4 passenger certified biplane during this time. The Gates flying circus has grown to almost a household name in the mid to late 20's and he wanted to benefit from that. Ivan Gates went to Charles Day for his expertise in aircraft design. They started The New Standard Company in Patterson New Jersey. Day designed the aircraft and they both benefited on the profits for a very short time. Originally the aircraft was a G.D.23, ( Gates, Day Standard. This was Charles Day 23rd aircraft design. In 1928 the G.D.24 came off the drawing board with a newer  and more powerful engine ( 220 hp Wright J-5 powered). The G.D.24 also had beautiful tapered sesqui wings.

Eventually Charles Day bought Gates out of the business for $50,000. This is when the D-25 was born. N928V was completed and given a airworthiness certificate on June 26 1930. The Aircraft was pictured in the National Geographic magazine in July 1936. Richard Johnson owner during that time made a rescue in the River of no return for one of the National Geographic explores. I have so many facts on this particular New Standard that it makes this aircraft truly a piece of American history. Only 8 New Standards are flying today. Pretty much every New standard is doing what it was designed to do and that is offering rides in a rare open cockpit biplane. 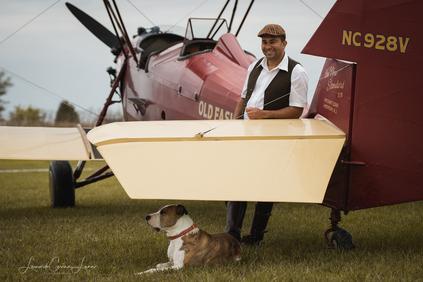 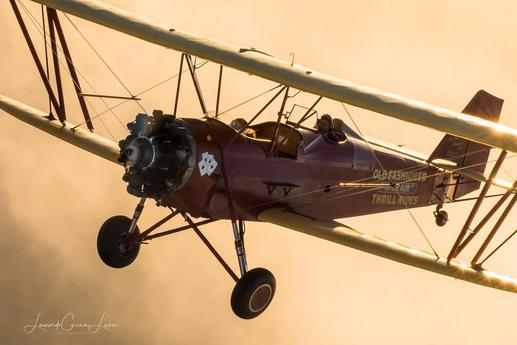 Dewey Davenport is the owner and operator of Goodfolk & O'Tymes Biplane rides.  Growing up in the Dayton area, birthplace of aviation has given him the passion to fly aircraft just like the Wright Brothers. Being involved in aviation for over 30 years has allowed him to experience many parts of the world from 30 years of model aircraft and 25 years flying full size aircraft. His passion for model aircraft began the interest in aviation that naturally continued into a hobby and career. During high school, Dewey started his flying lessons at a little airport in Waynesville Ohio and since then he has received his airline transport pilot license and has logged over 10000 hours flying a variety of aircraft such as the J-3 Cub, Beech-18, Twin Otters, Casa 212, PT-17 Stearman, DC-9, and Falcon 20 Jet.